This article appeared in the Financial Times on 26.1.17 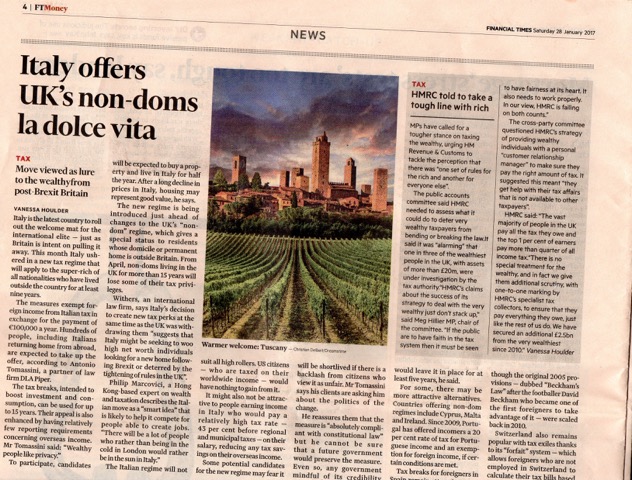 Experts think move may be designed to lure wealthy from post-Brexit Britain
JANUARY 26, 2017
by: Vanessa Houlder

Italy is the latest country to roll out the welcome mat for the international elite — just as Britain is intent on pulling it away. This month Italy ushered in a new tax regime that will apply to the super-rich of all nationalities who have lived outside the country for at least nine years.

The measures exempt foreign income from Italian tax in exchange for the payment of €100,000 a year. Hundreds of people, including Italians returning home from abroad, are expected to take up the offer, according to Antonio Tomassini, a partner of law firm DLA Piper.

The tax breaks, intended to boost investment and consumption, can be used for up to 15 years. Their appeal is also enhanced by having relatively few reporting requirements concerning overseas income. Mr Tomassini said: “Wealthy people like privacy.”
To participate, candidates will be expected to buy a property and live in Italy for half the year. After a long decline in prices in Italy, housing may represent good value, he says.

The new regime is being introduced just ahead of changes to the UK’s “non-dom” regime, which gives a special status to residents whose domicile or permanent home is outside Britain. From April, non-doms living in the UK for more than 15 years will lose some of their tax privileges.

Withers, an international law firm, says Italy’s decision to create new tax perks at the same time as the UK was withdrawing them “suggests that Italy might be seeking to woo high net worth individuals looking for a new home following Brexit or deterred by the tightening of rules in the UK”.

Philip Marcovici, a Hong Kong-based expert on wealth and taxation describes the Italian move as a “smart idea” that is likely to help it compete for people able to create jobs. “There will be a lot of people who rather than being in the cold in London would rather be in the sun in Italy.”

The Italian regime will not suit all high rollers. US citizens — who are taxed on their worldwide income — would have nothing to gain from it. It might also not be attractive to people earning income in Italy who would pay a relatively high tax rate — 43 per cent before regional and municipal taxes — on their salary, reducing any tax savings on their overseas income.

Some potential candidates for the new regime may fear it will be shortlived if there is a backlash from citizens who view it as unfair. Mr Tomassini says his clients are asking him about the politics of the change. He reassures them that the measure is “absolutely compliant with constitutional law” but he cannot be sure that a future government would preserve the measure. Even so, any government mindful of its credibility would leave it in place for at least five years, he said.
For some, there may be more attractive alternatives. Countries offering non-dom regimes include Cyprus, Malta and Ireland. Since 2009, Portugal has offered incomers a 20 per cent rate of tax for Portuguese income and an exemption for foreign income, if certain conditions are met.

Tax breaks for foreigners in Spain remain attractive, even though the original 2005 provisions — dubbed “Beckham’s Law” after the footballer David Beckham who became one of the first foreigners to take advantage of it — were scaled back in 2010. Switzerland also remains popular with tax exiles thanks to its “forfait” system — which allows foreigners who are not employed in Switzerland to calculate their tax bills based on their housing costs.

You can see all our properties on www.casatuscany.com