With great historical, cultural and architectural value subject to the heritage constraints of the Ministry of Cultural Heritage, this luxurious tourist accommodation complex is located in the municipality of Casole d’Elsa.

In an extraordinary landscape and geographical location of the Sienese Hills, the complex comprises buildings mainly used as resort in addition to about 20 hectares of land.

Situated on a hill populated by green woods and surrounded by lush vineyards, the luxury property enjoys an enviable view of the Chianti Senese valley.

A few kilometres from the medieval centre of Colle Val d’Elsa and only 28 km from Siena, it enjoys a favourable position.

The structure has ancient origins, as it dates back to the early Middle Ages. In fact, it was originally as a castle of the Lordship of Siena, owned by Countess Ava Matilda dé Franzosi, related to the King of France, Clovis.

The complex has been renovated and restored to meet five-star classification. It consists of a main building (former papal villa) with luxurious reception rooms as well as various “common” rooms that maintain the style and splendour of the late nineteenth century.

In the basement of the villa there is also a beautiful spa and relaxation area with Jacuzzis and large spaces for massages and treatments.

The large entrance square joins the former Papal Villa to the church, the adjacent former farm, the former stables, the building connecting the former stables and the former farm. Around there are other buildings such as the former Casa del Giardino dei Limoni, or the former Oliviera, which form a small village. The buildings are surrounded by a courtyard and eighteenth-century Italian gardens adorned with lemon trees as well as a grove of holm oaks with a pond, for a total area of ​​5,000 sqm.

The complex is equipped with a parking area bordering a pine forest, a tennis court and a heated 149 sqm swimming pool with terraces and solarium.

This is the main building and its appearance is a mix of medieval reminiscences of the ancient fortress and the sumptuousness of the Renaissance castle.

It has architectural elements of great value including fireplaces, portals, columns, frescoes, floors and fixtures.

The building is spread over four floors above ground plus a basement and two mezzanine floors.

The property has large loggia and the various floors are connected to each other by two internal stairs and an elevator, as well as a small freight elevator.

The first floor has a private museum which features various rooms; the Pope’s Hall, the Hall of the Marchesa Campana, the historical archive and the library.

Most of the rooms have vaulted ceilings and terracotta floors and the attic shows the structure of the exposed roof, consisting of struts, purlins, trusses and rafters.

In the basement of the medieval part are the water and heating systems that serve the building. This floor also has the wellness centre equipped with a whirlpool tub made from an ancient cistern with water treated and heated to 38 degrees C, the massage and treatment centre, Turkish bath, fitness area and relaxation area.

The rest of the building is almost entirely used for tourist accommodation with the exception of some rooms on the ground floor and the third floor which are used as a private residence. The latter consists of a large kitchen with storage room on the ground floor, while the sleeping area is on the third floor and consists of two bedrooms, two bathrooms, a hall and a loggia as well as a hallway.

The overall accommodation capacity of the property is 25 beds divided into 9 suites and 3 bedrooms all equipped with ensuite bathrooms.

This rectangular building with a pavilion roof is built perpendicular to the north-west facade of the main villa.

The two storey building (although there is an additional level on the north-west side) is entirely used as tourist accommodation and features a large hall and 5 suites on the ground floor and 6 suites + 1 bedroom on the first floor.

Behind the former stables are single level masonry buildings used as a storage area, oven and sawmill. The first is accessed from the square behind the former stables and is next to the service entrance gate to the complex. The second has a pavilion roof with a canopy over the entrance area supported by reinforced concrete pillars. The third has a single pitch roof. An additional storage room, probably once used as a shelter for animals, is located at the southern boundary of the property and consists of a small single storey masonry building with a single pitched roof with roof tiles.

Parallel to building B and adjacent to the church, this rectangular unit features a pavilion roof and is spread over two floors above ground connected to each other by a large covered staircase with an additional basement for cellar use. The latter consists of large rooms with vaulted ceilings in exposed brick and is connected to the rooms below the sacristy of the church where the water and heat distribution substation is located.

The layout is similar to building B with two floors used as guest rooms. On the ground floor (defined as first floor in the graphical drawings due to the difference in height with the former stables) are 2 rooms also accessible to people with reduced or impaired mobility.

On the ground floor, in addition to five suites, there are two rooms equipped with a toilet for staff use, two storerooms, two rooms used for displaying products for sale in the structure, equipped with a bathroom and two storage cupboards. These rooms are connected to the floor below by a small lifting platform.

The upper floor houses two bedrooms and three suites, as well as a staff room equipped with a toilet and a storage room for linen. Some rooms on the first floor (second level in the drawings) overlook small terraces, like a suite on the floor below.

Built in 2007, this building connects the two buildings described above in order to provide a ‘horseshoe’ shape with an internal garden. The ground floor is made up of a masonry wall on the internal side, closing a porticoed area used as a lemon-house, with a brick vaulted ceiling.

The first floor is of service (with rooms used as storage, ironing room, laundry etc) with a corridor, placed adjacent to the internal perimeter façade, which connects buildings B and C.

The second floor consists of a large roof terrace paved in terracotta. The various floors are connected to each other by an elevator and an internal staircase, while a freight elevator connects the ground floor with the laundry facilities.

Dedicated to San Carlo Borromeo, this fifteenth-century building is still used as a church and its original structure remains intact. Probably formed on a medieval pre-existence, it has a single plan with a rectangular layout and internal apse, with a large sacristy, obtained in the volumes of the building shared with the buildings behind it. The interior underwent renovation in 1751 with stucco decorations that frame family tombs, relics and historic furnishings. The property is built in adherence to the former farm and on the floor below a storage room and the water and heating systems have been created to serve the former stables and former farm complex.

Located in front of the main entrance gate with a terracotta paved courtyard in the access area, a courtyard in front of the kitchen and an internal courtyard. The rectangular building has two floors above ground. The ground floor has four restaurant rooms, a kitchen, washing area, toilets with hallway, storage room, cold storage rooms and boiler room. The first floor houses living quarters for the employees and includes bedrooms, bathrooms, three storerooms and a small terrace.

It is a building located in front of the main entrance gate, outside the park, with a courtyard paved in terracotta in the access area, a courtyard in front of the kitchen and an internal courtyard; it has a rectangular shape, with two floors above ground. On the ground floor there are four restaurant rooms, the kitchen and washing area, toilets with hallway, warehouse, cold rooms, closets and boiler room; on the first floor there are bedrooms with bathrooms for the employees of the structure, three closets and a small terrace.

Located near the swimming pool on a lower level terrace, this annex was probably once used a lemon house or shelter for garden tools. It is currently used as a bar room with a kitchen and washing room, storage room and toilets of the first level. The first basement floor has a room for staff, a convenience room, a bathroom and a storage room. The second basement floor is a cellar with a boiler room and a small storage room.

Single storey ‘L’ shaped building. The front faces directly on to the street whilst the rear overlooks the terracotta paved area where the swimming pool is. This building is used as a reception/concierge with attached offices and a toilet. This unit was enlarged in 2006.

This luxury property is set in 20 hectares of land which includes 1.3 hectares of olive groves, wood and arable land and 2.7 hectares of vineyard.

The farm lands have a flat or slightly hilly position with good exposure. The cultivation orientation is typical of an agricultural company in the Sienese hills area with the production of Chianti Colli Senesi DOCG and IGT Toscana Centrale and olive oil, from the transformation of grapes and olives produced on the farm.

The buildings are surrounded by courtyard and an eighteenth-century Italian gardens adorned with lemon trees as well as a grove of holm oaks with a pond for a total area of ​​5,000 sqm.

There is also a heated swimming pool of 149 sqm. 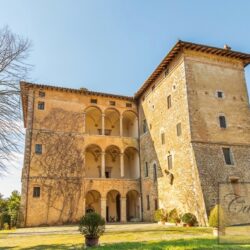 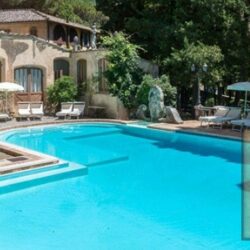 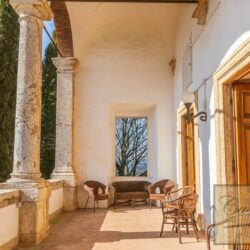 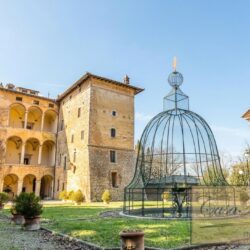 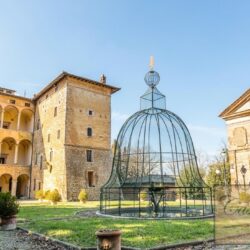 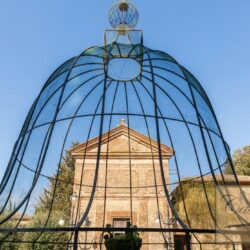 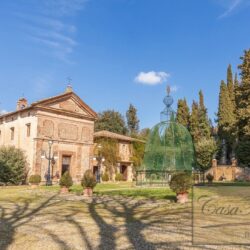 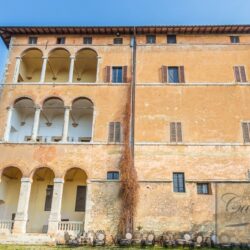 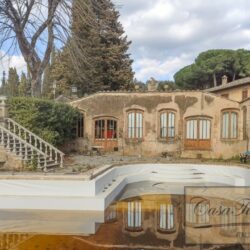 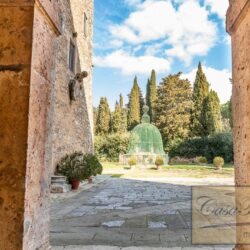 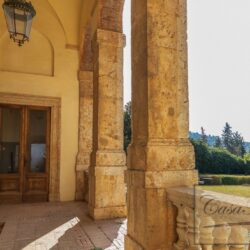 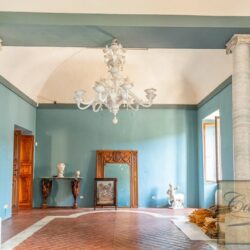 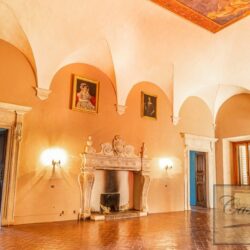 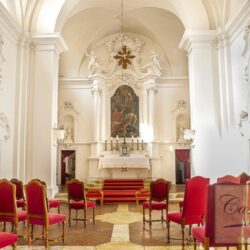 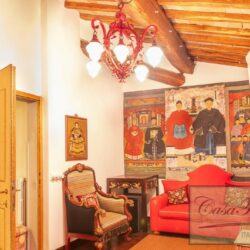 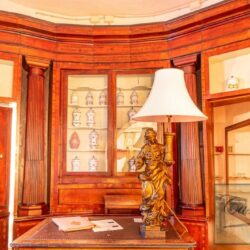 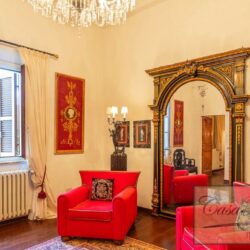 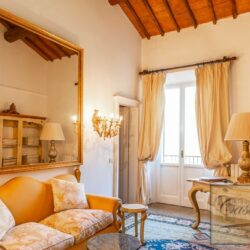 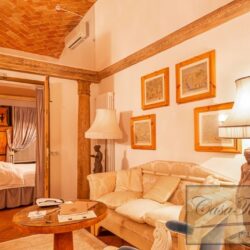 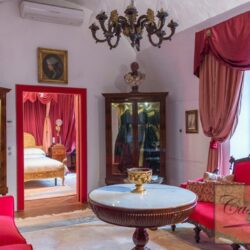 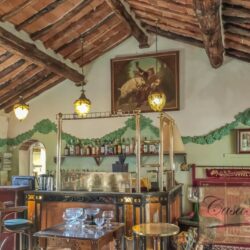 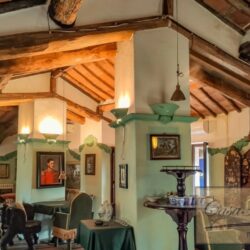 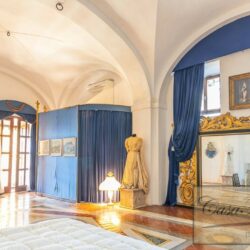 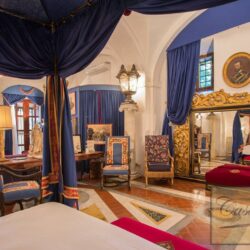 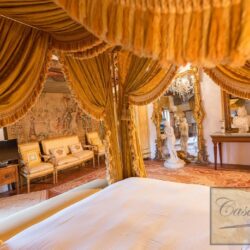 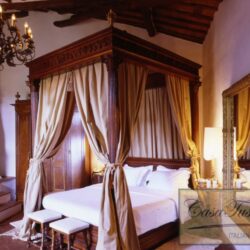 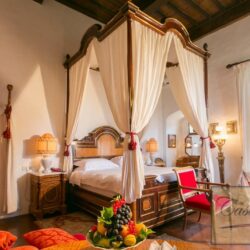 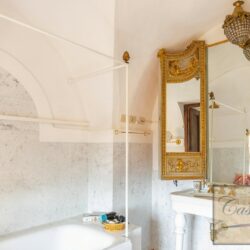